Mummy I want to eat this ,thats what my son told when  he saw me flipping the pages of the cookbook,
he was pointing to a page which had kabab on skewers ,I told him that i wiil prepare the same
but then I was craving for something hot and spicy so thus with no recipe in my mind I started with the preparation ,asked Advay to coarsely pound the whole seeds,while I was busy chopping the onions and ginger garlic,ya these days he helps me in the kitchen :-)
Recipe name Teekha Mutton Curry /Hot and spicy mutton curry 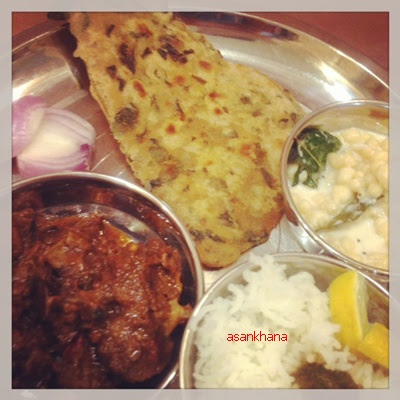 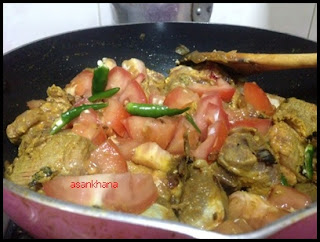 procedure
heat oil in non stick wok ,add the khada masala for tempering and lower the flame
slowly add the chopped onion followed by grated ginger-garlic paste and keep stirring
once the onions are done add the marinated goat meat  and salt keep stirring for 10 mins
add the coarsely pounded whole seeds and let it simmer for 20 mins
after 20 mins add sliced green chili and chopped tomato mix everything together.
cover and let it simmer for 15 mins ,after 15 mins transfer the content to pressure cooker
pressure cook for two to three whistles.
serve warm with plain rice or chapathi, 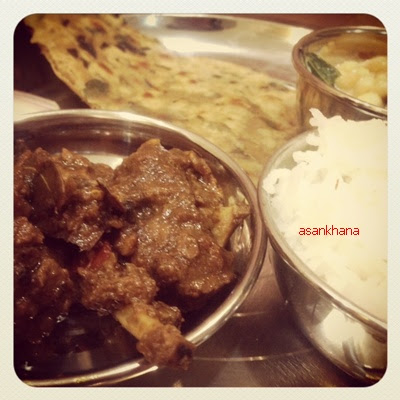 I paired the curry with Drumstick leaves paratha,boondi raita,plain rice topped with coriander chutney and some onions and lemon wedges on the side.try this one guys when you are craving for something hot and spicy:-)
for advay arranged some on a satay skewer and ya he was elated  and satiated
Recipe of drumstick paratha is the same as the paratha recipe blogged on thhis blog
In a mixing bowl add half tsp of carom seeds,salt as per taste,drumstick leaves one cup,pinch of turmeric,one fourth tsp oil,pinch of red chili powder,one cup of flour  and knead to mix a smooth dough ,divide the dough into equal sized lemon sized balls,flatten each ball and roll out in the shape of chapathi,heat a pan,and cook the paratha till its brown on both side.
serve warm 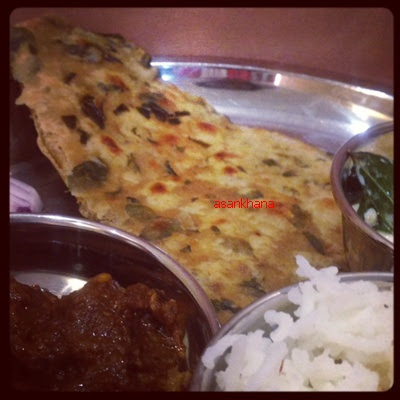 Linking this post to
The Weekly Story week  6 hosted by Colours Dekor.
Thats all guys ,wish you all happy week ahead,.