Parsi style chicken biryani and an experience to share,..:-)

I know its been almost more than a week since I was away from blogging,reason being my short trip to Singapore, ,I am back all with lotz of good memories and experiences,one such experience is of traveling with Advay alone for the first time. 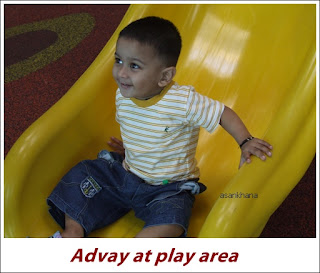 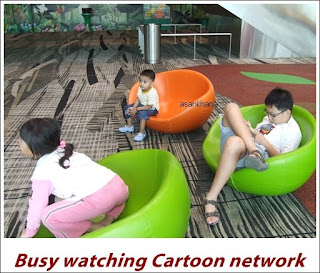 Guys how u all manage traveling with kids alone,I really had an experience this time ,as there was ample time for boarding I thought of taking Advay to Butterfly park in terminal three of Changi aiport,on the way to the park I saw childrens play area,so thought maybe I should let him play there for some time I never thought that he wont come out of the play area easily ,when there was time for boarding the flight 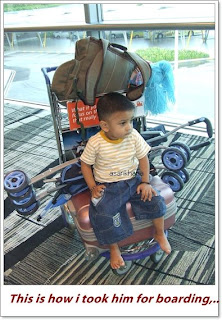 had to pull him out of the airport play area ,I really thought I gonna miss the flight as Advay was not ready to come out of the airport play area ,he used to slide from his buggy and from my lap too and after pulling him out for umpteenth time,I almost gave up,..but thanks to a saleswoman at the airport she managed for help for me at the terminal ,she asked someone to push the trolley for me so that I could manage Advay alone ,which was difficult again as he was not sitting on the luggage trolley, finally had to distract him with chocolates and thanks god I was able to board the flight on time

What a day it was and what a experience,..now when I have to travel alone with Advay I have to think twice,.;-)

Coming back to this post,today I gonna share recipe of Parsi style chicken biryani which I prepared from Parsi cook book. 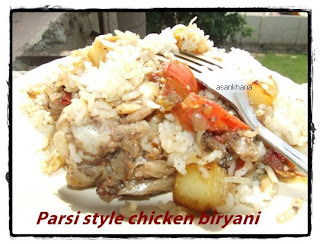 Something again new for me ya preparation is elaborate but the end result is too good,..infact as soon as I finished preparing the biryani,I didn’t wait to prepare any side dish had it alone and ya it was delicious,… 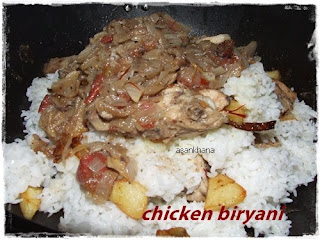 1) Marinate chicken with salt and ginger garlic paste and keep aside.

2) Make coarse mixture of red chillies,peppercorns,cloves and cinnamon.Mix in curd and pour the spices mixture on the chicken cover and keep aside for two hrs.

3) Thinly slice two onions and fry in the ghee till crisp.

4) Chop the potatoes into eight pieces each, salt them and fry them in the same ghee.Keep aside.

5) Prepare rice the usual way but with less water.

Chop the other two onions and fry in the leftover ghee.

Keep frying till the gravy thickens

Add two cups of water and cook over slow heat till tender.

In a deep large mouthed vessel spread an alternate layer of rice,fried onion

With the help of knife bore hole from top of the rice to the bottom of the vessel.

And pour in the remainder gravy.

Add saffron strands soaked in water the same way as above

Cook on low heat for one hr till done. 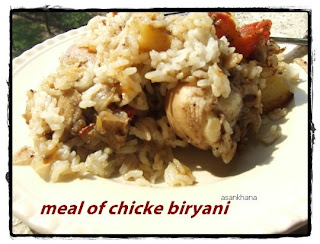